Musings and interviews:
New Works for Cello and Accordion
(liner notes for recording) 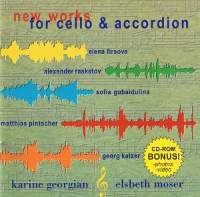 It is always something of a shock to find a cello and an accordion yoked together in a musical partnership. And yet one cannot escape the feeling that the two instruments, at first glance so utterly different from one another in origin and accustomed social habitat, do in fact belong together. ‘Analysis of the spectrum confirms what the ear will already have perceived: cello and accordion, so unlike one another in the nature of their sound production, nevertheless display marked tonal affinities,’ writes Georg Katzer in the introduction to his Versuchte Annäherung (Attempted Approach), whose title could stand as the motto for the present CD. For, taken as a whole, the works on this CD could well be described as the Attempted Approach of two apparently incompatible worlds. The same is true of Sofia Gubaidulina’s In Croce, in its original form conceived as a duo for cello and organ and refashioned by the composer in collaboration with Elsbeth Moser for bayan (the Russian button accordion) and cello. The works by Elena Firsova, Alexander Raskatov and Matthias Pintscher were expressly written for the Georgian-Moser Duo.

However individual may have been the musical impulses and ideas of these five composers, they have all responded to the implicit challenge of reconciling the irreconcilable, as Georg Katzer writes: ‘In my composition I have given form not only to tonal aspects of the “approaching nearness” but also to structural ones. The work is concerned with the bringing together of two instruments that are in fact utterly different. At times they closely intertwine, as in the fast uniritimico passages which recall free jazz breaks; sometimes they enjoy no more than a loose relationship or are even entirely uncoordinated (each “plays for himself alone”) only to come together at a later meeting point. Formally the piece is constructed as a series of moments with little recapitulation of what has gone before; the material is thus mainly moments musicaux, developing from small figures to come eventually to rest on a mutually sustained tone which itself then divides via quarter-tones to annex new terrain.’

Writing about Sofia Gubaidulina’s In Croce, Viktor Suslin uses similar terms. ‘The title refers not only to the essential meaning of the work; it also defines the structure of the sections. While at the beginning the instruments are asked to play at the extremes of their range — high up for the bayan and deep down for the cello — during the course of the composition they come ever closer together and finally “cross”. The point when the two lines actually cross is the climax, like an electrical discharge.’

Alexander Raskatov’s Xcos is comparably charged in a different but analogous way, aiming to capture, as he puts it, ‘the atmosphere of an ancient Jewish prayer at midnight’. Despite the rigorously pared-down material, not to mention the deliberate striving for a kind of musical stasis, the cello and the bayan here show that they can yield no less, indeed even a greater explosive charge, as they also do in Elena Firsova’s Crucifixion, which the composer describes as ‘reflecting the feelings of the sensitive soul subjected to the heaviest of trials’.

Pars pro toto, Matthias Pintscher has written illuminatingly on the special qualities of the Georgian-Moser duo: ‘The great physicality of their playing, so imbued with energy and strength, the way they transmit their experience of the music, the breathing and the pulse of the sound as one hears it, so fascinated me that I wanted at once to write a piece for them.’ From this fascination grew Dernier espace avec introspecteur, ‘the first part of a planned cycle examining the spatial sculpture of Joseph Beuys. The composition takes as its starting point an attempt to create a paraphrase in sound, at the same time of Beuys’s general conceptual definition of space, based on the Environment of 1982 (now a permanent installation in the Stuttgart Staatsgalerie), and of the concretely visualized lineaments and features of this actual installation, in order to simulate acoustically this particular space. In a broader sense, as the music progresses, it is thus possible to describe one aspect of the work as a musical depiction of the image, however, its essential relationship is concerned much more with associative phemonena such as, for example, suggestions of (aural) reflections, the holistic capturing of isolated static moments drawn from the totality and prismatically atomised into their smallest values of intensity, density and colour. From a retrospective inward glance the ‘introspecteur’ (‘looker-in’) is transformed into a ‘Listener-into-the-sound’, savouring to the full the presence of the moment in its raw state. For this reason I have drawn out all the musical elements as they occur during the progress of the piece to the slowest tempi, almost to the extent of isolating them, and I have kept the sonic material to a minimum in order to achieve the (barely hinted at) realisation of inner feelings.’

All physical and technical difficulties notwithstanding, the shock of the two sound-worlds colliding, the apparent impossibility of their combination, the ancient quest for the coincidentia oppositorium, in attaining which we hope to find the answer to all questions — these represent the fundamental inspiration which is to bring together that which is sundered and in the process give rise to music.

Elena Firsova was born in 1960 in Leningrad to parents who were both scientists. While she was very young the family moved to Moscow and it was here that the young composer received her musical education. From 1970 until 1975 she studied at the Moscow Conservatoire with Alexander Firumov (composition) and Yuri Kholopov (analysis).

In 1975 she met the late Edison Denisov, one of the commanding figures of Soviet music. From this meeting developed a friendship which had the profoundest influence on the young composer; moreover Denisov’s moral support of his younger colleague played a vital role in the face of the hostility shown towards her by the Union of Soviet Composers. Thanks to Denisov, Western doors began to open to her: performances of her works were given in 1979 in Cologne, Paris and Vienna, while a year later Jane Manning and the London Sinfonietta under Peter Eötvös presented her Petrarch Sonnets to London audiences.

Alexander Raskatov was born in Moscow in 1953 and studied at the Moscow Conservatoire with Albert Lehmann, taking his final examinations in 1978. One year later he became a member of the Union of Soviet Composers, while still pursuing post-graduate studies at the Conservatoire, from which he finally graduated with honours in 1982.

Since that time Alexander Raskatov has increasingly attracted the attention of musical circles throughout Europe. Among the organisations with whom he has collaborated are the Ensemble of the Bolshoi Theatre, the Deutsche Kammerphilharmonie, the London Sinfonietta, Ensemble Köln, Théâtre de la Complicité and the Musikfabrik NRW. His instrumental, vocal and symphonic works have been heard frequently in Eastern Europe, Japan and the USA. He has received commissions from the Paris Conservatoire, Radio France, the Almeida Festival in London, the Frankfurt Festival, Musikfabrik NRW and other music organisations. Recordings of his works have been issued by BIS, Chant du Monde and Megadisc.

In 1989 Alexander Raskatov was featured in a BBC TV film about Russian composers, and in 1992 BBC Radio Three devoted an hour-long programme to his music. In 1994 he was invited to Germany by the Arno Schmidt Foundation and Edition M. P. Belaieff, and since 1995 he has lived in Heidelberg.

In 1975 she co-founded with composers Vyacheslav Artyomov and Viktor Suslin the Astreya Group which concerned itself with improvisation on rarely-heard folk music and ritual instruments. Since the beginning of the 1980s, largely due to the powerful advocacy of Gidon Kremer, the music of Sofia Gubaidulina has made great inroads into the concert halls of the West, with the consequence that the composer now ranks along with Alfred Schnittke and Edison Denisov as one of the foremost composers of the former Soviet Union. She has been the recipient of numerous commissions and international awards.

‘The greatest influences on my work have been exerted by Dmitri Shostakovich and Anton Webern. However, these influences have left no visible traces on my music. It is simply that they are the two composers who have taught me that the most important thing is to be myself.’

Elsbeth Moser maintains a deep friendship with Sofia Gubaidulina, who dedicated to her the Trio Silenzio.

Matthias Pintscher was born in 1977 and studied violin, piano, percussion and conducting from an early age. After a period of general education at school in Britain he joined at the age of 17 the composition class of Giselher Klebe at the Musikhochschule in Detmold, and later came under the patronage of Hans Werner Henze. In 1992 he continued his studies with Manfred Trojahn in Düsseldorf; a year later he received commissions from the Dresdner Semperoper (the opera Thomas Chatterton) and from the Berlin Staatsoper (for a ballet). The 1997 Salzburg Festival staged a Composer’s Portrait of his works, at which a newly commissioned work for the London Philharmonic Orchestra was premiered. He has received several international prizes and awards for composition.

Georg Katzer was born in 1935 in Habelschwerdt in Silesia. He